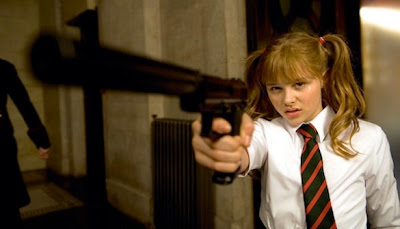 Kick-Ass comes out on DVD tomorrow, which reminded me how awesomely bonkers Chloe Grace Moretz was in it. She plays an 11-year-old assassin whose fierce performance got somewhat overshadowed in the media by the fact that she says some bad words. I thought she did a great job, especially with the demanding physicality of the role (she fights grown men!), but acting-wise, I think she delivers more roundkicks than actual lines. She's a promising young talent with an interesting slate ahead, including the remake Let Me In and the Scorsese fantasy Hugo Cabret. But until then, I thought of some of my favorite child performances that were more, shall we say, verbal/emotional.

Here's the thing. I hate children. I absolutely loathe them. So if they're just sitting there osncreen looking cute, that's not enough to win me over. But at the same time, I cut them slack because, well, they're kids. Acting is hard at any age, and especially when they're young you just can't really expect them to be exceptional. So I don't hold it against them, but that makes it even more of a treat when one shines.

When I started looking into this topic, I saw a lot of the same names/roles come up again and again. Your Portmans, Fannings, Osments. So since I don't want to just regurgitate those, I thought I'd highlight some of my personal faves that don't seem to get as much digital ink. For my purposes, I define "child" as age 12 or younger - 13 or older definitely counts as "teen" and that's a whole other barrel of monkeys.

Peter Billingsley in A Christmas Story (1983)
RALPHIEEEEE!!! Seriously, though, I think the credit here might actually go to Jean Shepherd as the narrator. Without Ralphie's adult reflections on his childhood, watching him ham it up might be a bit too cutesy. But still, the kid's got a knack for comedy, and Ian Petrella as his younger brother is pretty great too.


Mason Gamble in Rushmore (1998)
Gamble is great as Dirk Calloway, the very young friend of protagonist Max Fischer. He is mature and sensible beyond his years, but the bitterness he projects when Max betrays him is extremely heartfelt and well-projected through the prism of little boy rage. Dirk has a special place in my heart because he's the closest cinematic equivalent to what I was like as a kid - an extremely smart, mature (hey, it's what my teachers said), and curiously deadpan outcast.

Jeremy Blackman in Magnolia (1999) [Note: I can't find his birthdate, but he's listed as a 2009 college grad, which would probably make him either 12 or 13 at the time of filming. Whatever, I'm counting it.]
As isolated child prodigy Stanley Spector, Blackman delivers a heartbreaking and inspiring performance of a kid who just wants to be taken seriously. From softly telling his dad that he has to be nicer to him or standing up to a game show host after a denied bathroom break causes Stanley to wet himself, his is a triumph for children everywhere. And no one appreciates the (appropriately) bizarro ending more than Stanley.

Grant Rosenmeyer and Jonah Meyerson in The Royal Tenenbaums (2001)
Though their screen time is relatively brief, this duo is very sweet as the identically-dressed sons of the overprotective Chas Tenenbaum, who constantly makes them run safety drills and never lets them have fun. They comply, but sadly and begrudgingly. So when their wacky grandfather takes them on a day of "forbidden" adventures, it's one of the most joyful moments in the film.

Maude and Iris Apatow in Knocked Up (2007)
Somtimes nepotism DOES work, as it does with Apatow casting his two daughters as the children of Leslie Mann (their actual mother) and Paul Rudd. What could have been essentially two glorified extras, these two imps are true scene-stealers, opting to play it a little more outrageous than you'd expect from little girls. Case in point: Maude's absurd and surprisingly graphic explanation of where she believes babies come from (it involves "your butt falling off").

Bill Milner in Son of Rambow (2007)
As I've mentioned previously, the whole "young innocent child" shtick has to really stand out for me to be taken with it. And here, as Will Proudfoot, Milner crafts just such a character. He belongs to a sort of Mormon/Quaker/Amish religious group that forbids him from numerous activities such as seeing movies. But life changes forever when a rebellious classmate named Lee Carter (Will Poulter, also great but disqualified from my list due to his age) shows him a bootlegged video of Rambo. From then on, we live vicariously through Will's thrills and mishaps of trying to recreate Rambo's adventures himself while bonding with the unpredictable Lee. Will has boundless energy and a sweet demeanor, and he serves as a great portal to one's own childhood memories of discovering taboo delights.
Kodi Smit-McPhee in The Road (2009)
Okay, so I didn't read the book because I am a bad person, but even just from seeing this movie I could tell that if you didn't have the right kid, it wouldn't have been worth making. I thought Smit-McPhee was incredible at maintaining the delicate balance the character needs. He has to be pretty frightened by certain events without being screechy and grating, and at the same time depict a character completely accustomed to a post-apocalyptic world without being unrealistically stoic. I was apprehensive going into the film, predicting that he would just be clinging to Viggo Mortensen and screaming "PA I'M SCARED!!!" the whole time, but I found myself very impressed.

The children of The White Ribbon (2009)
Maybe it's the stark black and white cinematography, or the austere 1910s clothing and environments, but I don't think I've ever seen more sinister-looking children outside of a horror movie. The young cast has an array of very interesting faces, made all the more creepy by the fact that their expressions are usually blank. There's an array of ages here, some of which are too old, but they all kind of meld together into an ominous ensemble.

I know that this list skews very recent, which is a total coincidence. Some of my older picks, such as Virginia Weidler in The Philadelphia Story (1940) and Diana Lynn in The Major and the Minor (1942) and The Miracle of Morgan's Creek (1944) turned out to be above the age limit. Oh well. So fill me in - what are your favorite performances by youngsters (under age 13)?
Posted by Julie at 3:23 PM

Agreed - the Son of Rambow kids were excellent! I'm also a fan of Freddy Highmore, though I doubt he'll break out of the child actor mould and do anything when he's older. Who knows, though, he might be the next JGL.

I'd add Nicholas Hoult as Marcus in About a Boy; he must've been 12 at the time of filming.

I did read The Road and also thought Kodi Smit-McPhee did a good job. His character is more complex than it appears at first glance.

Chloe Grace Moretz in Kick-Ass was good but Isabelle Fuhrman in Orphan was far better.

Agree about the Apatow girls! They were also great in Funny People. Another great performance was the kid in The Switch. Very surprising! I'm sure you'd agree!

The Rushmore pick was great, and well-deserved. The last time I watched it, I was thinking about how good he was in the role.